For all your general chit chat, caching or not.
Post Reply
19 posts

I'm having a very bad night.

Can people please tell good stories for me to read? Please?
Last edited by Dvixen on 24 September 10 1:10 am, edited 1 time in total.
Top

aw, soz about that!
Hey, something funny happened to me yesterday Tuesday whilst caching...
http://www.geocaching.com/seek/cache_de ... 9b672d51da
Top

Oh and something else funny happened today,
After dinner, we were clearing up and Julia asked Shaun, "Dad, can you tell me about Quantum Mechanics?". She does that, just out of the blue...a strange 12 year old that is for sure

I don't know if it's uplifting but I guess you might get a laugh at my expense!
Top

Two caches in Darwin are still better than no caches at all...

GG, what is a bobtail? First thing that springs to mind is a Lynx, but somehow I don't think you'd be stepping on one in the wild over here!

Day is better, but still want to read happy and funny stories!
Top

Various amusements in amongst the logs and photos here: http://www.geocaching.com/seek/cache_de ... y&decrypt=
Top

Do a search via GCA for McPhan's logs. Maybe not his recent SA numbers run (

Awesome logs Yurt - classic signs that caching is your life and there's not too much that will stop you on your journey.

Had us laughing this morning as we read your logs knowing our adventures today will be boring now in comparison!!
Top

We have seen some great logs and stories from caches and posted logs and can post plenty ,but this one would always be in our top 10 favourites.

It comes from a cache called " Crossing Over " ( GC10FX5 ) by Rallyxwagon.Its located a couple of hours north of Melbourne in the Eildon region.
To set the scene first. The entrance has two driveways off the highway.The correct dirt entrance is to a car park,you then walk down a boardwalk through a forest to a stream which is flowing fast ,deep and very cold from the high country snow run offs.You have to then go through the creek in bare feet to get the cache ,as there is no other way to cross.

The other entrance road next to the car park is the wrong one,which is to an adjacent farm and farmhouse.

[We had a little bit of trouble with this cache. Firstly finding suitable access landed us in a spot of bother. Next! found what looked like a part of the old main road and as it was pointing in the general direction of GZ he headed off down it. On the way we passed through a big imposing looking gateway, that's funny I thought what's that doing there oh well. When we got to the end of the road we were still a fair way from GZ so we started looking for a way through and we didn't notice that we were in fact on private property and the irate owner was heading right for us.
We tried to explain that we were looking for a cache but that just made him angrier as it seems this happens all the time and he had had enough. I tried to tell him that we were sorry and we would leave now when he got physical and thru a punch and I landed on my butt on the ground. Not being one the take something like that lying down, it was on. All I will about what happened after that is that I'm not looking forward to the trip to court for trespassing and assault!
After that I was not about to give up without find the cache so we headed down the road and finally found the correct place to access this cache and parked the car. We found the track and it's only 600 meters into the bush so we set off. After we had walked for a little while we came to a creek and DOH it's on the other side.
I'm not giving up on this so easily, so it's off with the shoes and across the creek with bare feet. Yikes that water is freezing!!!
When I got to the other side I realised that the cache is still a 10 meters away in the bush and I left my stuff, shoes and all on the seat at the other side of the water, double DOH!
Now I'm walking through the native Australia bush with my Cold Tender Bare Feet and some other bruises from the scuffle earlier oh ain't this caching stuff fun!
Still determined to press on I stepped on a what looked like a bit of flat ground covered by bark NUH it's a hole covered by bark and one of my naked, cold tender feet is in it and I think I disturbed the resident as I hit the ground. I not sure but I think I felt something slither across my exposed flesh it in quite a hurry as I was trying to extricate my foot from its home.
By this time Next! had found the cache TNLNSL TFTC] April Fool, see Next's log below for what really happened

16:20 was found with Scooters Mob. Had to remove shoes to ford river & bush bash in bare feet... well that was fun! TNLNSL TFTC

here is a cool story and a cache i built.
(it is in an ACACIA tree) 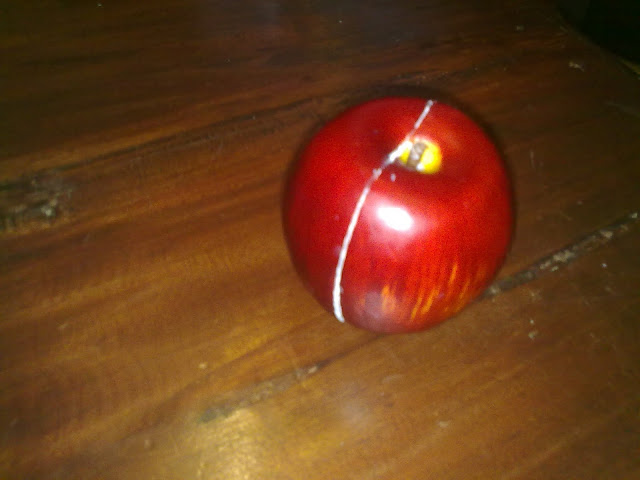 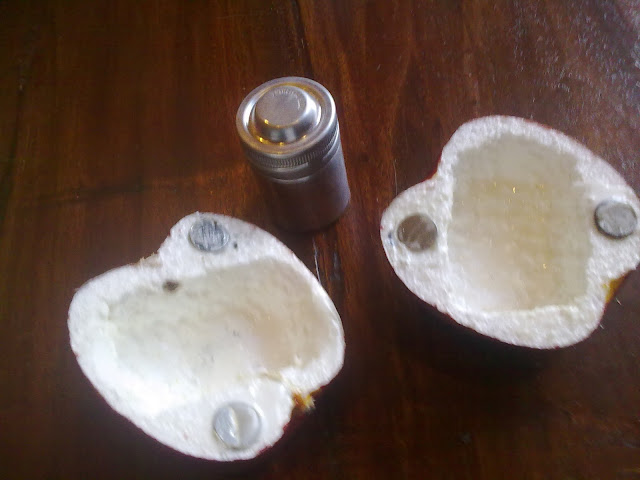 Oh wait, that wasn't me.

I'm not sure how to link to a specific log so I shall just copy my DNF log from "aaarrgh! ye' dumbo is orange!" on the 28th December 2009

Couldn't find this one. Found a vicious attack frog which for a while we thought was guarding the cache. I saw something but couldn't reach it so Mrs. Cantanga (who has smaller hands) decided to try get it. She found it was a bit slimy so she grabbed a stick to try get it out that way. upon shoving the stick at it it made what sounded like a growl which made her scream, jump rather high and then immediately run and hide behind me. I had a closer investigation and managed to see that it was a frog so we left him (or her) alone. The scream caught the attention of a nearby shop owner who wondered what was going on. As I couldn't come up with a decent excuse I told him we were geocaching and all about it. He sounded interested and joined in the hunt but still we could not find it. Funnest cache of the trip thanks to the frog.

And for the record we have since found it and it was nowhere near the frog.
Also if you go to the cache page and read the log before mine on the 19th November they also had an interesting experience
Top

My log for the Nina River cache (GCF6CB):
2pm. After heading south down from the top of the Lewis Pass I overshot the track to the footbridge and stopped further down the road abeam the cache. The distance to the cache was 240m, so not being sure which side of the river it was (but fearing it was going to be on the western side) I homed directly towards it. As I entered the shingle riverbed it became obvious that there were going to be no zbffl fghzc ‘s on this side of the river! Still I was interested in how far it would be in from the west bank so I continued towards the river. At the eastern bank I was only 40m away from the cache. As the 10m wide river was running clear and the level was low I had the option of either fording the river or tramping back to the road and then up to the foot bridge and then back down the track to just opposite where I was now. The later option would involve trekking about 1km to reach the cache plus a similar return distance to the vehicle. It really was a “no contest”, so off came my boots, socks and jeans. As the cache was only 30m in from the western bank I elected to leave my socks and jeans on the eastern bank whilst I quickly found and logged the cache.

After finding a stout stick to assist with the river crossing I crossed the river carrying just my boots, gps, a little yellow rubber ducky exchange gift and the clue sheet. My toes were just starting to freeze as I clambered ashore. I hurriedly replaced the boots and clambered up a 20m high bank to the track. Because of having the gps dangling upside down from my wrist as I crossed the river and also the terrain shading of the high western bank satellite coverage was lost. On reaching the track I still hadn’t got a satellite lock on due to the tree cover so I walked up and down the track waiting for a lock on and ……..you guessed it!

3 trampers (and I’ll bet they were the only ones on that track all weekend) came along the track to confront this bald headed guy clad in only a jersey and a pair of boots carrying a little yellow rubber ducky, what possibly looked like a mobile phone and piece of paper. Somewhat embarrassed I could only stammer, “I am taking a shortcut and my trousers are on the other side of the river” before leaving them to tramp on out toward the footbridge. Boy, I’ll bet that encounter will provoke some morning talks about the interesting people you sometimes meet whilst tramping in the New Zealand bush.

As I filled in the log the little bloodsuckers (sandflies) arrived in force and I had to hurry out of there. + little yellow rubber ducky, - scented candle.

I laughed all the way back to the truck (diesel SUV) and all the way home to Kaiapoi. Still smiling even now.
Top