Google Streetview launches in Australia Today.
http://www.gizmodo.com.au/2008/08/googl ... ralia.html
The article mentions that it will cover a large chunk of the country at launch.
The pic in the article is of Apollo Bay.
I was driving behind the google car when it was going through town that morning.

If you can find yourself in Streetview, post your screenshots here
Top

Works for me in FF

The detail is great, and by the looks of it, they caught a lot of people on bin day around here

hmm, so many ideas for checking out cache locations

Anyone found anything funny yet? People doing things, or looking funny

or even see anyone doing an actual cache

I saw that car a few months ago in Burnie of all places.

They even drove past my place, and I live in the sticks.
Cool, but scary!
Top

2dudez wrote:I was driving behind the google car when it was going through town that morning.

So where's the shot of your vehicle from the Streetview vehicle?

Just spying on some cachers places as we speak. 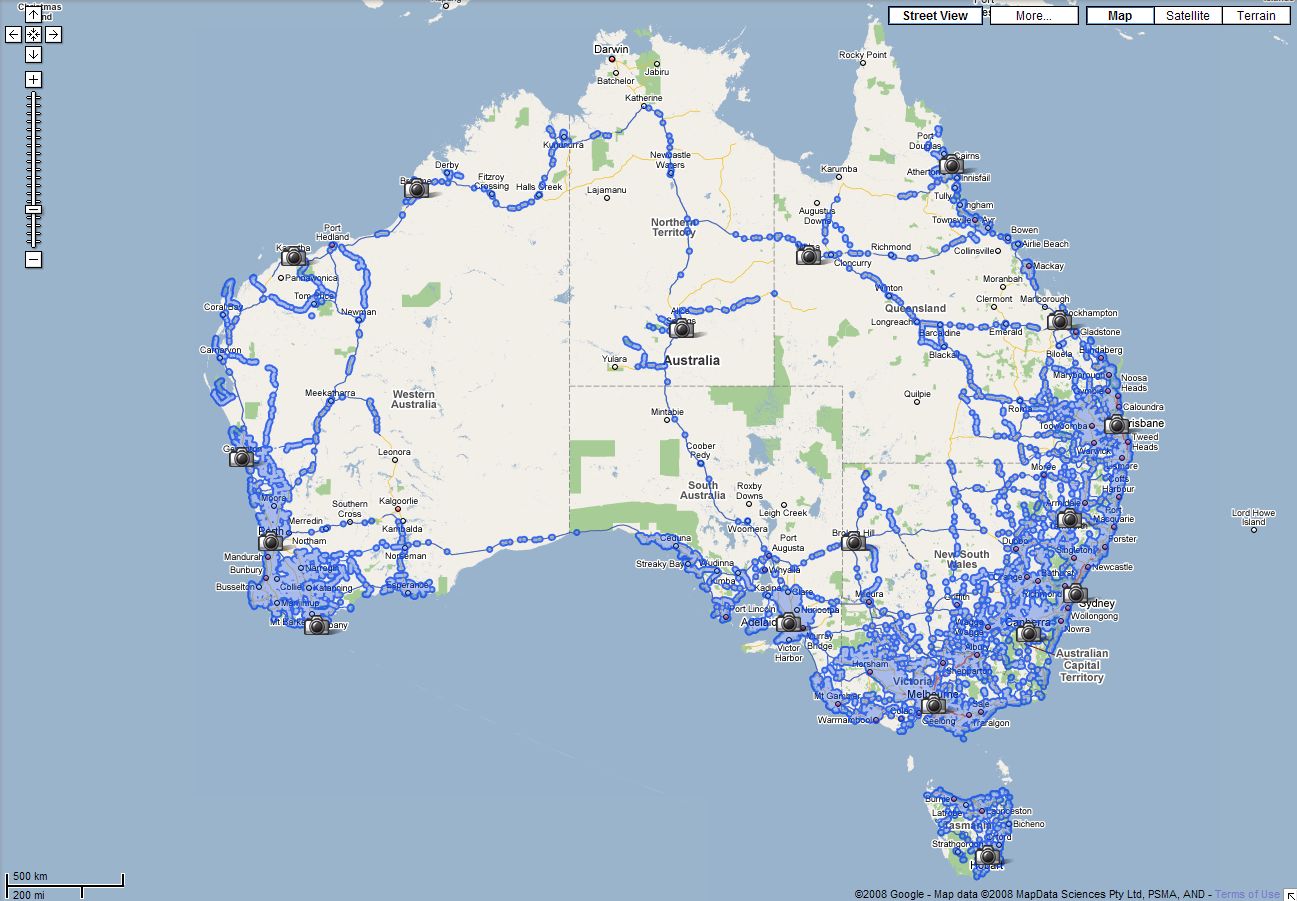 2dudez wrote:I was driving behind the google car when it was going through town that morning.

So where's the shot of your vehicle from the Streetview vehicle?


I was driving behind it, and hoped i'd get my pic taken, but looking on the street view where this was, there is no sign of me.
At least I got to take a pic of them though.

Amazing!
Thought I'd been missing something, but now I see it's a whole new deal here.
It'll be interesting to see how far and deep this impressive photographic info. travels.

GammaPiSigma
450 or more roots tripped over

GPS cache mobile caught driving in Campbelltown. I said to my wife (Sigma) "Hey, that is the google vehicle", and it was. We are in the red Merc on the right.
<br><br>

Photos are a bit old, but very scary. big brother is watching.

And in typical street map style they only covered 1/2 of Hindmarsh Island.

It peeves me that many (not all) street maps end at the monument on Hindmarsh Island and don't do the rest of the island.

My street is not covered.

Looking at Goolwa it appears the photos were taken around Xmas time as there are Xmas trees up and down the street on the shop verandah posts etc. and it was a Monday as my daughter's bin haven't been put around the back.

Daughter has found herself in two places at work in Port Elliot and at trade store in Victor Harbor.
Top

I checked out a couple of my cache sites.

One where the cache should be clearly visible, but the resolution is a bit blurry and you can't make it out.

Another where there is a mistake in the maps, and as you follow in street view you appear to fall off a cliff where the map mistake is. I hope the Google driver wasn't hurt.

I checked out a couple of relatives. A sister in law in Gladstone must be pissed off as apparently her house is now/was a vacant block.
Seriously though,the pics of her street are not of her street which is an old section of town. The pics shown are all new under construction houses and freshly cleared areas. Someone screwed up somewhere.

For anyone in Gladstone Qld check out Angler St.
Top

The images of my place were taken in December last year as I've got the Christmas decorations out in the garden and up on the house.

They went up last week in November and came down first week of January, so the pics are not exactly new, but they surely aren't that old either.

Lucky I wasn't hanging my bum over the eaves