crew 153 wrote:The link to the geobirthday page seems to be broken..

It takes a hell of long time to run and you've caught it in the middle of the file creation. It's not "wrong" it's just "not yet finished".

by crew 153
I'm getting the message

Geocaching Australia is pleased to wish a happy geobirthday to the following geocachers.

Warning: Invalid argument supplied for foreach() in /var/www/site/gca/docroot/stats/geobirthday/html.php on line 36

A geobirthday is celebrated on the day the geocacher made their first log on a non-locationless / non-virtual cache.

by caughtatwork
That the "not yet finished" message. OK, the message sucks. The process was in the middle of creating the xml to display on the screen, so as the file is not yet complete the XML parser finds a premature end of file. I'll add this to the list of things to look at as to how to improve the "still processing" message.

It seems to have run and is working now.
http://geocaching.com.au/stats/geobirthday/

by crew 153
Thanks C@W. Certainly an odd waiting message.

by SamCarter
One issue and one idea:

Issue:
I use Firefox (26.0) on a MacBook Pro (in case either of these bits of information matters). When I have a gca google map open and I click on a cache, the really useful little quote box opens up with the data about cache name, type, hider, and recent log types shows up. It seems that these vary in size, however, and/or are sometimes not wide enough to show cache type and owner on a single line. Since they seem to be of constant height, this means that if the type/owner line overflows, then the recent log types aren't visible. Is it possible to either make the quote boxes a constant and wider width or (probably more difficult) able to vary their own size to accommodate the data? 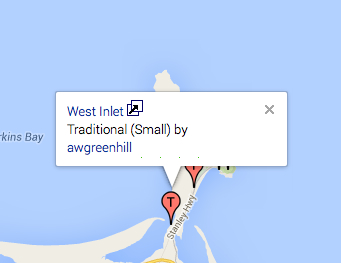 Idea:
Cache owner's name on the logging page -- At the moment the name of the cache owner is not visible on the page where you compose/submit your log. I sometimes like to acknowledge the hider/owner in my logs, and it would be great if the name was there, perhaps just after/under the cache name.

by caughtatwork
That's a small issue with the Google Maps API to draw the info marker. I haven't worked out to "fix it". If you close the box and click the icon again it works fine. Something weird, but definitely noted at development time, but rushed through to address the maps issue.

I like the idea of the owner name (hiddeen by : xxxx) on the my/log page. I'll add this in when I get a moment.

by Yurt
When adding a photo to a log for some reason a photo that appears in portrait when uploading from the window then appears rotated to landscape when in the gallery. I've tried rotating the photo but it always appears on its side. I'm using Chrome. Perhaps it makes the thumbnail appear as though it's in portrait when it isn't. Even so I can't seem to rotate it to a position where it will appear portrait in the gallery.

This seems to be a sporadic issue - doesn't always happen. I'm working on a fix of my own but just wondering if it was known.

I've signed by daughter Lottielooo up to a premium member for GC.com, downloaded a my finds PQ and then uploaded to GCA on the Import function. She has 275 GC finds but only 247 on GCA even after the PQ upload.

I guess it's because she changed her name ages ago from munchkaroo to Lottielooo but I thought a "My finds PQ" would solve this. Yes? No? Possible solutions?

I've updated the database, but now you have some duplicates (about 10 I think).

by traineediplomat
and the best way of dealing with such duplicates? (take them round the back with a shovel?).....

Happy to go through and delete duplicates, but just want to make sure I delete the right one

by Coffee and Cache
Hi,
Looks like some database functions are not working at the current time, including retrieving caches and other obvious things?
Is it just me ? I'll try later.
Thanks

by Coffee and Cache
Seems ok now. Maybe was just extremely slow? Thanks.

by pjmpjm
Are the 'Top Finders' and so forth not updating since April 1st, or is it just me?

by caughtatwork
Looks wrong doesn't it. I have to check this one at home tonight.
All times are UTC+11:00
Page 85 of 111
Powered by phpBB® Forum Software © phpBB Limited
https://www.phpbb.com/